A closer look at the sociological perspective of Alejandro Portes

Portes is the author of more than 240 articles and chapters on national development, international migration, Latin American and Caribbean urbanization, and economic sociology.  He has published 40 books and special issues.  His books include City on the Edge – the Transformation of Miami (California 1993), co-authored with Alex Stepick and winner of the Robert Park Award for best book in urban sociology and the Anthony Leeds Award for best book in urban anthropology in 1995; and Immigrant America:  A Portrait, 4th edition, (California 2014), designated as a Centennial Publication by the University of California Press in 1996.  His most recent book Spanish Legacies: The Coming of Age of the Second Generation has just been released.

His current research is on the adaptation process of the immigrant second generation in comparative perspective, the role of institutions on national development, and the comparative study of immigrant transnational organizations. In 2001, he published, with Rubén G. Rumbaut, Legacies: The Story of the Immigrant Second Generation and Ethnicities:  Children of Immigrants in America (California 2001).  Legacies is the winner of the 2002 Distinguished Scholarship Award from the American Sociological Association and of the 2002 W. I. Thomas and Florian Znaniecki Award for best book from the International Migration Section of ASA.

His books and articles have been translated into Spanish, Portuguese, Italian, Chinese, and Japanese. Ten volumes of his collected essays have been published in English, Spanish, and Portuguese.  His most recent articles have appeared in the American Sociological Review, Social Forces, Annals of the American Academy of Political and Social Sciences, Proceedings of the National Academy of Sciences, International Migration Review, Population and Development Review, and the British Journal of Sociology.

In 2008, he received the annual Award for Scientific Reviewing (Social and Political Sciences) from the National Academy of Sciences. In 2010, he was the recipient of the W.E.B. DuBois Career of Distinguished Scholarship Award from the American Sociological Association and, in 2012, he was named as the James Coleman Fellow of the American Academy of Political and Social Sciences. In 2019, he received the Princess of Asturias Award for Social Sciences (Spain).

Portes has been elected to Phi Beta Kappa and the American Philosophical Society, the country’s oldest honorary academic organizations.

Manuel Fernández-Esquinas holds a PhD in Sociology and Political Sciences (Universidad Complutense de Madrid, Spain). His main fields of research are sociology of innovation, sociology of science, innovation polities and knowledge transfer. He is a research scientist at the Spanish Council for Scientific Research (CSIC). Currently he serves as President of the Spanish Sociological Federation. 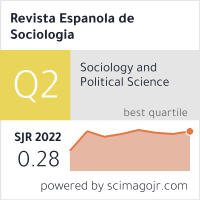