Analysis of the determinant factors affecting changes from dairy to cattle production in the Cantabrian Coast: Empirical analysis for an inland area of Galicia.

This paper analyzes the factors that contribute to changes in farming specialization, and it assesses the importance of such factors in the occurred transformations from dairy to cattle farms in Northern Spain. In line with this objective, we examine the role played on this process by the farms’ characteristics as well as farmers’ socio-economic factors. Furthermore, we asses the role played by public land consolidation policies, which were the main structural policies applied in this area during the last decades. Our data came from a representative sample of 458 livestock farms (active in 1999) in the province of ACoruña, during the period 1985-1999. From the total, 46 farms switched their productive orientation quitting dairy and entering into cattle production during the period of study. The rest kept their dairy specialization. Results indicate that dairy exit is positively related to farmer’s age. At the same time, it is negatively related to the following variables: dairy production per cow, total land, the existence of heirs, and the amount of family members working outside the farm. Furthermore, the fact that the farm had been involved in a land consolidation process did not have any direct effect on this change of productive orientation. 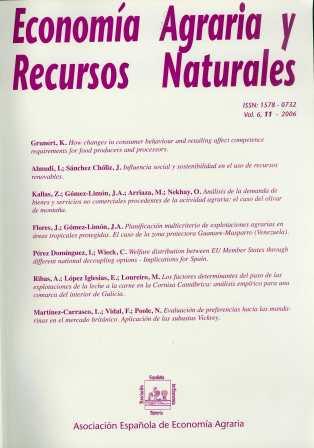 Assignment of publishing rights for accepted manuscripts: Authors will assign to the Spanish Association of Agricultural Economics (Asociación Española de Economía Agraria, AEEA) the copyright of the manuscript and any supplemental tables, illustrations or other information submitted therewith that are intended for publication as part of or as a supplement to the manuscript in all forms and media (whether now known or hereafter developed), throughout the world, in all languages, for the full term of copyright, effective when and if the article is accepted for publication. No revisions, additional terms or addenda to this Agreement can be accepted without our express written consent.